THE GONG OF TIME 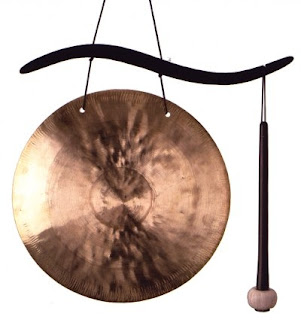 [Note: this is written entirely tongue in cheek, intended as humor - I hope no one is offended:)]

The gong of time rings with a resounding thunk at the moment one looks back on all the years, realizing with a sudden shock how, the last ten years having zipped by in a nanosecond, the years stretching ahead are ominously few. After sixty, one thinks (or tries not to think) of best and worst case scenarios: ten to fifteen years no longer stretches ahead lazily, but looms as a finite entity which must not be squandered.

One tricks oneself into moving through lazy self-directed days, one still wastes whole chunks of time, hours, days, even weeks. There is still next week, next month, next year to clean out the detritus in the cupboards, write the book of one's life, make out a will, tell everyone in your life what they mean to you. Until there isnt.

After sixty, the sense of infinite possibility changes. Once one envisioned white knights who may yet arrive. Now the probable scenario switches to handy-dart drivers, meals on wheels, even hearse drivers who may pull up to one's door unexpectedly. Why unexpected? Why is it that each of us knows that everyone dies, but continues to believe it will always be Somebody Else? Possibilities now include knee replacement and orthotics, the challenge of living on too little money, and the stunning dental lottery by which one races one's teeth to the Final Demise.

One has long since stopped clicking through the leering hairy photos on match.com. Who needs a grizzled bad-tempered wart-encrusted lothario with wandering eyes and expensive tobacco habits cluttering up one's living space? The lifelong pursuit of peace is attained and re-embraced with every bout of solitude, finally underlining that this is my chosen and preferred state, reclaimed after each relinquishment with stronger fervor.

The time factor begins to press urgently when someone who started one's life fully expecting to have books published has been so busy raising children, that she has written only one, as the second and perhaps the most definitive clamors insistently. The time is now to tell my story, proof against my children's claims that they had the most traumatic childhoods on the planet. Yes, even worse than Rwandan children, or those raised in caves in Afghanistan! I remember all those years, all the laughter, all I put into it - my life's blood, a trend that continues into my declining years, head bloody but unbowed. I shall write it down, all I remember, hoping at least one of my offspring will read it:)

Declining years - somehow when I look back at the trajectory of this path I bumbled upon, I see an ascent, rather than a descent. Flailing and wretched, I stumbled by fate and fortune onto some magical turnings, and grew with every decade deeper into myself and the journey. If this be close to the pinnacle, it might give one pause to take stock: the fatigue of shoring up other peoples' journeys; limbs showing the wear and tear of all the self-flogging required to assume a load big enough for two or three, toppling about precariously on my shoulders; days when I can barely stagger about with yelps of pain; finances best not even mentioned; in need of help, after all the helping, and a future that promises no ease of these difficulties.

BUT! The riches! Having raised those children alone with all ofthe energy and heart I could summon. Being a loved and appreciated grandma and now a great-grandma. The coffeehouse years that showed me Another Way. Having made one of the strongest dreams of my life come true in my move to the ocean. Ten glorious years immersed in the wonders of nature, in a community of kindred spirits. Having come home fully to myself, being okay with who I am and the life I have lived. Loving my little trailer, my books and music, my furry companions and the peacefulness of my life, waking up each day to a day that is my own, at last, at LAST!

I heard the gong clearly when my mother died, in that passage conferring the mantle of family matriarch on me. With her passing, there was no longer a buffer between me and my own mortality. Her presence had kept me young, still someone's child. With her death in 1994, perforce I became a grownup.

I see in the younger generation the self-absorption of the young, the youthful unawareness of just how mortal I am, just how finite my years. They think they have lots of time to work out the issues and the anger. They dont know that their perception of the years I gave my heart and soul to rewrites history in a way that erases my life, removes all the joy and striving, all the effort, that I put into our lives together.

The gong reverberates inside more frequently; the press of time ahead being extremely finite, is still there. Yet human nature is such that one wakes to the promise of a new day as if one always will. Unable or unwilling to grasp the reality, even as one sits by the deathbeds of others, that one morning will dawn without one being present to witness it.

In response to death, one can only live, as fully and consciously as one can, appreciating the gifts and the glory, the way a new bud unfurls under the first warmth of spring, or a newborn opens its eyes on a world tinged with wonder.

Walking with my sister and the dogs the other night, after my son had once again unthinkingly flattened me by a careless comment that erased his entire childhood, I moaned, "It's going to be horrible having to go through my Life Review at the end of my life. It's been hard enough living through it once!"

My sister smiled. "I'm sure when St Peter sees you, he'll just say 'dont even bother' and wave you right in," and we both cackled hopelessly.