SITTING ON A PORCH SWING 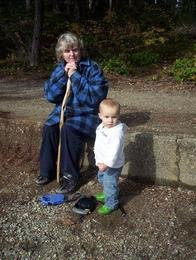 There is a woman sitting on a porch swing.
She is rocking
to ease
the hard little kernel of pain
she has always carried
under her valiant smile,
the strain of sadness underlying
the positive talk,
the unrelenting hope,
the dismayed recognition
at the way it has all turned out
so far from the once upon a time visions
of long ago,
for so long dreaming one day it would all be
so much better.

She is rocking her way
to the end of her life
letting go of the past,
letting go of all fractious and
inharmonious bodies,
distancing herself from all the
crisis and clamour and youthful drama
her age has no energy for,
gathering her limited energy, conserving,
for the needs of the present day
letting go of the dreams once dreamed
and the years that cannot come again,
leting go of Home and making a home where she is,
trying to be grateful for struggle
Because It Could Always Be Worse,
(and often is!)

She is trying to cling to the vanishing life that is hers
under the claims and demands that would gobble it all
and then burp unperturbed at its ending
having eaten its fill.

She is longing for long white empty beaches
and the roar of the waves,
the cry of the gulls, the eagle soaring wind-swept skies,
and the picky-toeing progress of the blue heron,
serene at the inlet's edge
and no humans anywhere within sight or hearing
but her.
She is longing for her last years to be her own
something of her own choosing
having only chosen once - maybe twice -
in her entire life of responsibility
for herself
All the rest was for others,
the pitfall of those who take seriously
the role of mother.

While rocking, she achieves the state of No Thought,
that Nirvana the sages and mystics seek through practice
is effortless for her
for she is too exhausted to think
Inner peace disguised as exhaustion
or vice versa
She rocks and thoughts flit
like the little birds in the hedgerow
and fly fast away
She rocks and promises herself
that one day at a time
is all she has to manage
The rest will take care of itself
She prays for relief
that some of the burdens be lifted
But she doesnt believe enough
they ever will

One day she will rise wraith-like
from all the burdens that claim her
and will fly to a farther shore.
She would rather stay here
for she really likes the scenery
on planet earth
But she likes it best without people
all their egoes and clamour
and inflated self-worth

Somewhere monks bow to the tone of a fulsome bell
Somewhere nomads hunger for food and justice
Somewhere ignorant armies clash and thunder
Somewhere butterflies follow their migration of pure wonder
Somewhere a whale gives a mighty blow,
then dives, then breaches
and always always always
her heart trods
those long and empty beaches
On her porch swing she is with them all,
all but the fighting.
She has no fight in her,
her striving is for surviving

Today her first great grandchild has come to planet earth
and all the hope she has blesses this birth. 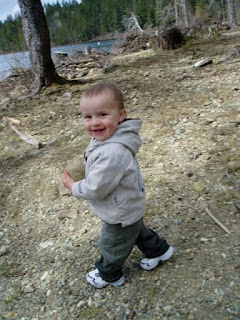 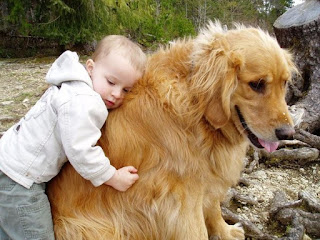 With his buddy, Lukey

Every now and then
I look up and out
from this hobbled existence
through a window of miracles
and glimpse
a heron gliding by
like a grim and skinny matron
clutching her pocketbook
under a stiff wing,
or a shimmery rainbow,
gossamer valentine from the deity,
or the silent promise of daybreak
every day brand new upon the planet
or a patch of blue amidst gray storm clouds
or the stalwart enduring heartbeat
of a thousand year old cedar,
eagle peering down
from its topmost scrag
Every now and then a brand new miracle occurs:
a baby catching its first breath
utters its protesting cry
at leaving its gloried heaven
to endure this planet's pain
Each time we celebrate with joy
a new soul's journey
is beginning
once again
Every now and then I look up
beyond the burden and the blessings
at the vast and constant sky
and remember
what I'm doing here
and why
Posted by Sherry Blue Sky at 1:32 PM