She is the Belle Grande Dame of the pasture,
at 30, the indisputable boss.
Rowdy is second in command,
deferring to the dowager,
and the youngest, the little red filly, Reba,
skitters away if Beau so much as turns
a lidded eye on her.

Beau is a grand old girl:
she has lived long, for a horse,
and she and I recognize in each other the fatigue,
the hobbling, the times when our bodies
cause us distress. 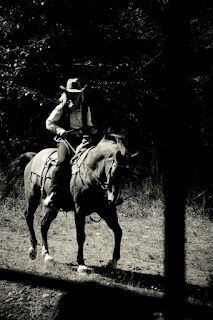 But she remembers years when she raced
pell-mell alongside a steam train,
as her owner, cap gun aloft, and face masked,
with her posse, pretended to rob the train,
for the amusement of the tourists,
steam belching from the smokestack,
cap guns firing, people yelling,
Beau galloping alongside,
wheeling into the bush with a flourish,
loving every moment,
a gal with a flair for the dramatic.

Every summer, Beau walked the length
of Tenth Avenue in the parade,
unfazed by the noise, the clamour,
neck arched proudly,
sweet-stepping to the side to put her nose down
to the clapping children:
such a good old girl.

In her dotage, she took up cattle sorting,
did some barrel racing,
never missed a beat,
onlookers yelling from the crowd:
"She'll never die, Lori!"

But this winter, we nearly lost her.
She was colic-ing, she almost went down.
We thought for sure that we would lose her,
but, like a trooper, she rallied,
made it through.
That day, when it looked grim,
I looked her in the eye
and told her I knew how she felt,
when bodies age, but spirits are still strong.
I told her she was a good girl, the best.
I saw an Old Soul in her eyes,
who recognized me,
two old females past their prime,
with memories of their glory years
encumbered by bodies
that don't work well any more.

But who are not ready yet,
to quit.

for Elizabeth's prompt at isojournal, for napowrimo, Day 4 - what do you see in a pair of eyes?