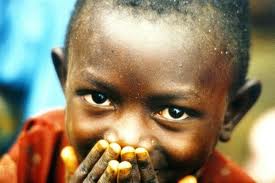 child-soldier.org
Kids, I am not a big fan of movie stars, but I applaud George Clooney for not only going to the Sudan to see what life is like on the ground for its people, but using his platform to take a stand in the recent protest in Washington outside the Sudanese embassy, about the Sudanese humanitarian crisis. He was arrested, with others, to make the strong statement that intervention and humanitarian aid needs to happen NOW. He spoke of the Sudanese government's blocking of food and aid deliveries, famine, the bombing that is aimed at insurgents, but is also killing civilians. He spoke of child soldiers, the raping and killing that is happening now, the starvation.
In looking on google for a photo to accompany this poem, I saw some pictures that stunned me and broke my heart all over again.  I didnt post one here as it is too heavy, unless a person is strong enough to withstand it. But this happy eyed little boy? He is a child soldier. Still able to smile, so he must not have been one for long.........dear God in Heaven. What species are we?
Starvation and famine,
while aid is blocked and governments politicize,
bombs falling on the innocent,
human skeletons
crawling across the desert,
child soldiers,
unspeakable acts
against all of
humanity........
God of the All That Is,
I beseech you,
change, transform
the hearts
of humankind.
Posted by Sherry Blue Sky at 5:08 PM

Email ThisBlogThis!Share to TwitterShare to FacebookShare to Pinterest
Labels: the Sudan