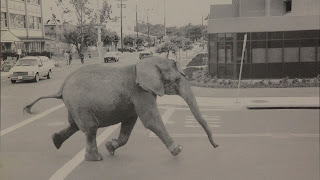 Row upon row of grinning people, munching popcorn,
eyes on the ring, ready to be entertained,
and in she comes, huge grey beast,
prodded by sharp poles, yelled at by trainers.
She sullenly complies till, one sharp jab too many,
she turns on her keeper, knocks him down,
rolls him around the floor, enraged,
charges out of the tent, folks screaming and scattering,
is shot in the street, paying for her captors' harshness
with her life - this life she did not choose.


TYKE was an African elephant, not suited for circus work, (what elephant is?) yet made to perform anyway, for years,  until the day in 1994 when she snapped, killed her trainer, and ran into the streets of Honolulu. She was shot and killed by police, who fired 86 bullets into her. There is a film about her, (Tyke: Elephant Outlaw) explaining how owners had been advised against continuing to force her to perform, advice ignored in the interest of finances, as usual. She was not the outlaw, in her run for a freedom found only in her death. This breaks my heart.

for Kerry's prompt at the Sunday Mini Challenge at Real Toads: ten lines on the theme of "This is not what we came here to see."


source: Wikipedia
Posted by Sherry Blue Sky at 11:08 AM