The Face of Loyalty 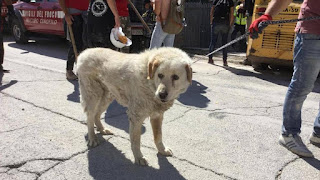 Bravo, you are well-named.
When rescuers tried to take you away
from the rubble that had been your home,
you stood firm.
Loyally,
your job was to remain at your post,
stand guard
until your people
could return.

When the walls tumble,
when all one has is lost,
a faithful dog's heart
is the great gift
that remains.

Bravo's  people were pulled from the rubble and taken away, after the earthquakes in Italy. He felt it was his job to guard what was left of their crumbled home, and, once he was lifted from the rubble, growled at rescuers, refusing to leave his post. Finally, they were able to convince him to go with them, and he was taken for treatment of a serious leg injury. Just one more small story of survival of the earthquake in Italy that touched my heart. I hope his people will find Bravo soon.