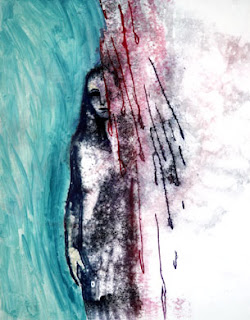 
For half her life, the Dead Woman was in hiding,
her heart tender and traumatized
by all she had lived through.
She wore a cloak of silence, saw life through
a bubble of protection, as if through a pane;
felt safe only at home with her children,
guarded that safety by allowing only children in.

Then she walked through the door of the coffeehouse,
found a magical world of plants and smiles and music,
filled with people who lived gently on the earth -
she had known they must be somewhere,
and here they were.

They gave her space to feel safe.
At first, she hid in the kitchen; then the music
drew her to the doorway,
where she perched, enchanted,
against the old sewing machine,
ready to fly back to the kitchen
should she feel the need.

One night was especially magical.
Music and hearts had flown.
The man who ran the coffeehouse
asked if he could give her a hug.
She walked home under the stars,
her heart stirring to life again.
Next morning, she called him.
"It hurts!" she told him.
"It's better to be frozen!"
Coming to life,
her thawing heart ached
with the pain and power
of feeling her feelings.

It was too late anyway.
She continued to thaw,
to come alive, unfurled her branches,
laughed and sang and grew.
Brock and Friends healed a lifetime's trauma
by simply loving her until she learned
to love herself.


Brock and Friends in Kelowna was where I spent the early 80's: a funky old house, hung with plants and stained glass, where we had live music every night. I quickly became the person who did the cooking and serving, running the inside of the place; Brock Tully did the promotion and organizing of events. We laughed so much in those years. When the coffeehouse closed, I gave a farewell speech on stage in front of 800 people - the person once too scared to come out of the kitchen. One of the women told me after, "Your power and your beauty made me cry." They had watched my emergence.

Brock and Friends changed my life - they gave it back to me, brand new, so I got a shot at a better way of life. It was one of the great gifts of my life, a turning point. Had that place not happened to me, I never would have wound up in Tofino.

Making the Soul Card Journey with Elizabeth Crawford
Posted by Sherry Blue Sky at 9:45 AM