WHEN YOU LIVE WITH A WOLF 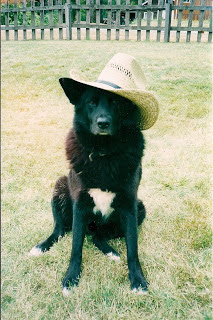 For fourteen years, I lived with a very noisy, hilarious, big, black wolf. With him, my inner Wild Woman came to life, and I lived my highest, most glorious years in Tofino. We mourned its loss together when we had to leave. He has been gone almost ten years now, and I still have tears every time I think of him, or write about him. He was the love of my life; I have written many, many poems about him, and will likely write many more. He Lived Large, did Pup.


When you live with a wolf,
you learn about connection:
to the wild, and to another being,
deeply, without barriers,
even speech, because, so often,
your minds  meet
and, sometimes, he tries to talk.

When you live with a wolf,
you must seek out the wild places daily.
He must never be caged, or enclosed,
or tied up, for his spirit must run free
and unfettered, as it would with his pack.
He resists all restraints,
refuses to submit, is very Alpha
(which you, decidedly, are not),
stays with you because he chooses to,
not because you make him.
Living with you is a negotiation he makes,
because he loves you,
but you know that he relinquishes a great deal;
it is a compromise, giving up the wild,
and living in a house with you.

Walls remain foreign to his substance.
He will eat a doorjamb, of an afternoon,
to be Out rather than In.

When you live with a wolf, his intelligence
and devotion shine in his eyes, which never leave you.
He lies at the front of the yard
where he can keep an eye out for danger;
places himself between you and any threat.

But when you are walking through the forest,
by the river or along the beach
then he is gone far ahead,
his spirit joyously at one with the wild,
and he won't come back till he is ready.

He always knows where you are,
checks on you from time to time,
then is off again, in and out of the water,
joyous, and grinning his big toothy grin.

When it is time to go he plods slowly,
with resignation and a heartfelt sigh;
climbs grudgingly into the car
to resume domesticity once more.
His heart accompanies you,
but  his wild free spirit he has left behind,
on those beloved shores,
to be picked up again upon return.

When you live with a wolf,
you cohabit with a very large presence.
This makes his eventual absence
almost too great to bear.

But those years as twin souls,
that called forth your deep wilderness nature,
taught you joy as no one and nothing else
ever has.

For them, you would not have traded anything.
To have had them, you bear the pain.
For them - for him -
you will, eternally and forever,
give thanks.


for Linda at dVerse: Fur Companions

I revised an older poem for this prompt.