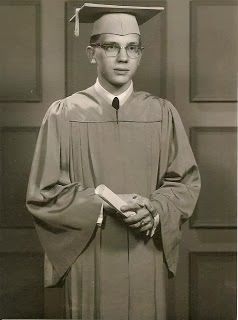 He was a slight, pouty-mouthed, effeminate lad,
unable to come out as gay
in a Catholic school of blustering good-ole-boys,
in a conventional, narrow, small church town in the '60's.

The other boys would tease and provoke him
for his differentness,
till he erupted in a red-faced, frothing rage.
"Begone, thou milk-faced fools!" he'd quote,
followed by an entire declamation from Shakespeare,
while the other boys fell about laughing.

I watched, and did not speak,
not knowing how to make them stop.
But I fell in beside him, walking home.
We did not talk about the pain of school.
We just walked, quietly, in solidarity.

He always waited for me, after that,
at the corner of Elliott and Richter.
We'd crunch our way through the snow
towards the lit-up building,
to endure another day of surviving school.

He came into his own in university,
where individuality was admired.
There, his knowledge of art and Shakespeare,
of being his own person,
stood him in good stead.
There he found love,
and lived his happiest years.

His story does not end well:
only that one, brief love,
then aloneness, illness, poverty,
gay-bashing, disinterest by the police
to whom he reported the crime,
and rage against his fate.
He took his life one early morning
and definitively left this world.
A sad life that would have been
- deserved to be -
so brilliant, with the addition of
a little human warmth and acceptance.

I wrote Marcel's story, Remembering Marcel, here, if anyone cares to read more about him. His life and death sort of broke my heart.