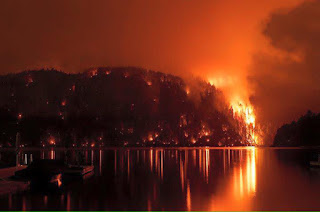 Under the imperturbable
blackened bowl of sky,
the fires burned all night;
the crackle and roar licking at the heels
of the frightened fleeing deer,
the singed wolves,
the crouching cougar,
the mother bear and her cubs.
All are expelled, terrified,
hungry and homeless,
onto the streets and roads,
no safe place to run,
frightened, helpless, exposed
to the wildlife officer's gun
come morning.

What a world this is. Global warming bringing such extreme heat that rainforests turn into deserts. What will it take for legislation to come from government, for the tough changes to be made? For industry to do their part, pay their share, clean up their mess? 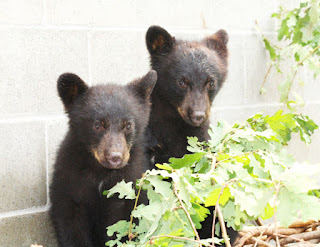 Today there is a news story going viral, about a wildlife officer up-Island being suspended without pay for refusing to shoot two orphaned bear cubs. He took them to a wildlife recovery centre after their mother was shot, as she desperately tried to find food. Not much food available in burning forests. Or in dried up rivers.

Because he had a heart, and is humane, he did not follow orders. Good for him! What a world this is, where every problem is solved by shooting something, where the preservation of the  planet we live on is not our first priority.

The little bears will be all right and will be released into the wild once they are old enough. If there is any wild left by then.

for Sumana's prompt at Poets United: Night. It is hard for me to write right now. I find this hard to take, my friends.