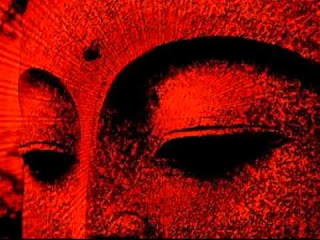 The sun god rises, crimson on the mountain
of eternal snow,
like the bloodstains of the red-robed monks
who fell before the invaders' guns.
May there be no more bloodshed.
May its snow stay forever on its peaks,
so all beings may live.

The snow leopard pads, elusive,
on its slippery slopes,
furtive as the Old Ones,
who clasp the forbidden image
of their beloved, the Dalai Lama,
close to their hearts, hidden away
from the oppressors' eyes,
which are everywhere.
May the deity who lives
inside the mountain
step as softly, when he awakens,
so the mountain does not fall.

On its summery slopes, drogpa,*
yaks and sheep bask in grassy fields of wildflowers.
One might, in the moment,
forget all those who died,
fighting for a free Tibet.

One might forget the bitter winds of winter,
howling around the cement walls,
when humans, yaks and snow leopards alike
shiver in their skins,
and the wolves howl dismally
on the icy slopes.

There will be enough stores of dri**
to comfort all this winter.
In the soft light of the lamp,
wrapped in our chubas,***
the Old Ones will whisper stories
of life before the invaders came,
when the young Dalai Lama
still lived in the Potala Palace,
before so many monks were killed,
so many temples shattered,
so many sacred relics desecrated.
Their eyes grow sad, remembering.
Their wrinkles chart a landscape
of painful history,
a loss engraved within each line.

In other lifetimes I have made
the essential sacred pilgrimage,
three times around the base of the holy mountain.
I have made prostrations for a hundred miles,
so my soul and my country can be free.

May the invaders see the justice of retreat.
May the land of Tibet be restored
to its peaceful people.
May the Precious One return to his palace
so all may follow the meritorious
path of Dharma.


*drogpa are a nomadic people who prefer to live year round in yak hair tents, away from towns and villages

**dri butter, made from yak milk,  is a valuable resource for cooking, fuel for lamps and for barter and paying taxes.

*** chubas are the traditional garment, worn by men and women, and adapted for winter wear by lining them with wool or sheepskin (normally the nomads favor the sheepskin lining, while those who live indoors use woolen lining.)

I borrowed a past life - or a dream within a dream - for this poem.