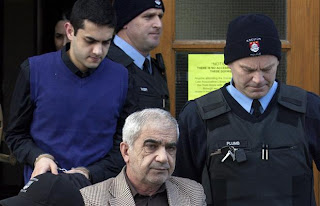 At the Thursday Think Tank, the prompt is Honour. (Canada spells it with a U). Sadly, the Canadian news this year has been full of the Shafia "honour killings". Afghan Mohammad Shafia, his second wife and his son, were found guilty of murdering their three daughters and Shafia's other wife, who had been brought to Canada as a domestic servant. The girls were deemed to be influenced by Western freedoms, dressing provocatively and dating boys. The family "honour" had to be preserved.


School officials were concerned about the girls, one of whom was profoundly sad,  the other acting out. Child welfare investigations were unsuccessful, as interviews were conducted in the presence of the father, so the girls could not speak freely.


The judge concluded sentencing with a stinging denunciation. “The apparent reason behind these cold-blooded, shameless murders was that the four completely innocent victims offended your twisted notion of honour, a notion of honour that is founded upon the domination and control of women, a sick notion of honour that has absolutely no place in any civilized society.”


"Justice was done," news reporters say. But that doesn't bring back the three girls and their stepmother.

It is a strange perspective,
difficult to understand,
when dating, dressing in Western clothes,
and being a teenage girl
are transgressions punishable by death,
but murder
for the sake of "family honour"
is considered
acceptable
and just,
not an offence.