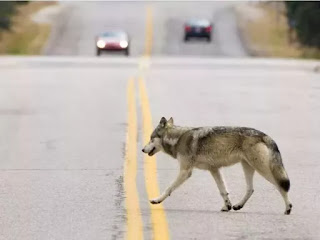 In what feels like their final twilight,
an injured Father Wolf and two babies
try to live.
Mother Wolf was shot,
four of her babies
were struck by trains,
and living is not easy
even in a national forest.

How are they to live,
when even the protected places
are unsafe?
Humans, humans everywhere,
and no safe place
to hide.

["In the past three months, two of the five members of the pack — including the alpha female, or mother wolf — have been shot and killed by wildlife officials in Banff National Park and a third is now looking for food in campgrounds.

"At least four of this year’s six wolf pups have also died after being struck by trains on the railway line and the alpha male is limping after likely being hit by a car on the Trans-Canada Highway.

“It’s not going to get any better,” said Paul Paquet, an adjunct professor at the University of Calgary and carnivore specialist with the Raincoast Conservation Foundation. “This is the legacy of decisions made by Parks Canada for many years.

“The decisions have really been about the commercialization of Banff and the ongoing development — that’s pretty clear and it’s at a huge cost to the environment. It’s not just wolves. Wolves are just symbolic of that problem.”

"Paquet suggested it’s getting more and more difficult for any wildlife to eke out a living in Banff National Park."]

posted for Kerry's challenge at Real Toads: The Final Twilight