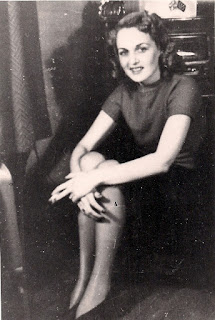 At Real Toads,  Marian's prompt was: Strawberry Blonde. Do click on the link, as the other poets participating wrote some terrific poems from this prompt. It made me think immediately of two hair stories from the long-ago..........

Her dad lifted one of her soft red curls,
saying, "You have pretty hair.
Isn't this the color your mom's hair
used to be?"
He was trying to be nice
but she froze him out,
because of what happened
during his blackouts,
that he could never remember.

Her mom said, later,
"You should be nice to your dad.
He is trying hard."
But she was too young
to be forgiving, then.

He died soon after.
No more chances to be nice.
Years more, to forgive.

Her mom was sixteen
when they met -
thin as a rail, beautiful,
with long bleached blonde hair
hanging all down her back.

Her dad was playing in the band,
a Tommy Dorsey song,
but when she walked in,
he set down his saxaphone
and jumped
over the piano
to come down and meet her.

And that was it.
"The only man I ever loved,"
her mother would say,
for the rest of her life.

It was a hard life:
alcohol, raised voices and
bumps and crashes in the night,
poverty, and desperate struggle,
and then his early death.

But at the end,
the blonde bombshell,
who once was a strawberry blonde,
could say, with satisfaction,
somehow, that
"In my life, I had it all."
Posted by Sherry Blue Sky at 11:13 AM

Email ThisBlogThis!Share to TwitterShare to FacebookShare to Pinterest
Labels: love stories from the past