Trusting in the Safety of God's Hands 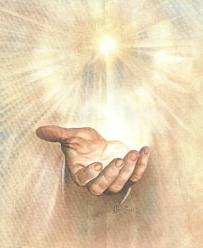 
Faiza is beyond exhausted,
at the very edge of collapse,
so focussed has she been
on caring for Bill,
making his final passage
to the next dimension.

"He told me he's ready to go,"
she tells me,
her eyes briming with tears,
in her face such  profound grief,
tempered, finally, with acceptance
that what she most feared
is, indeed, happening.

Small and bent,
grimacing with pain,
she hobbles tenderly to his side.

"Are you all right, habibti?
What would you like?
Some cereal, nice and warm?
I'll get it for you,
my sweetheart."

Miles and miles she shuffles daily
in that small house,
caring for her husband's every need.

Week by week, I watch him sinking
deeper into the sleep
that presages the longest sleep.
As his cheeks become sunken,
his face jaundiced,
his breathing harsher,
still, each week, he asks me,
"How are you, sweetie?
It must be Thursday."

Faiza shows me a small photo.
It is the hand of God,
which she tells me appeared
on a mirror somewhere and,
when they wiped the mirror,
it appeared on the other mirror.
She has placed it over her left shoulder,
right in the spot where she says
the pain is like a knife, stabbing.

She prays for strength to see Bill through.
She dare not collapse.
Will power keeps her back upright
that longs to lie flat.
Determination keeps her feet shuffling
on legs that barely hold her up.
Bill's need and her devotion
is her focus.
Later, she will worry about herself.
I worry for her, as she will have
no resources left with which to
weather the hardest months of all,
which loom ever closer.

May God hold them both
in the palm of His hand.
Posted by Sherry Blue Sky at 9:23 AM

Email ThisBlogThis!Share to TwitterShare to FacebookShare to Pinterest
Labels: Faiza and Bill.