A Message from Mr. Dog 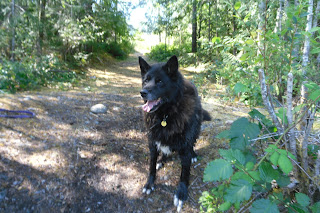 [Pup's last time at Great Central, summer of 2010]
Wow. Was just talking to my son, Jeff, who listens to a higher frequency than is accessible to the rest of us and, as always, he blew me away with what he had to say.

Jeff has been exploring astral projection of late, and he told me the other night he visited Mr. Dog. (We often, in his later years, called Pup Mr. Dog). Jeff also saw the last cat he had, and Snoopy, the dog we had in Kelowna, who died when she was thirteen in Tofino, and who was very close to Jeff.

I tend to be cautious, personally,  about things like astral projection, likely in fear I might not return to my body in time for breakfast. But I dont discount others' experiences and am open to pretty much anything - the entire universe is bathed in mystery. Anything is possible.

My immediate question was "Did he give you a message for me?" And Jeff said that there was no specific message, but they exchanged a lot of love and that of course Pup loves me. I told him next time he sees him to tell him I miss him.

I miss him more than anyone or anything in my entire life. It was like, this lifetime, my soulmate came wearing black fur. Truly. He had near-human intelligence and we connected on a visceral and psychic level. Perhaps a connection from past lives - it's the only explanation I have for how hard his death hit me. In a life full of losses, this one has been the hardest to withstand.

Jeff says Pup is full of love for me and knows I love him.  Jeff told me to just talk to him and he will hear me.

Jeff says Pup is very happy and vibrant and full of ecstasy, and that made me happy. No more pain. He was in terrible pain his last years, but he kept on living, for my sake, longer than he might have. I know he didn't want to leave me.

So I have had yet another cry about how much I miss that wonderful creature. What joy he brought to my life. 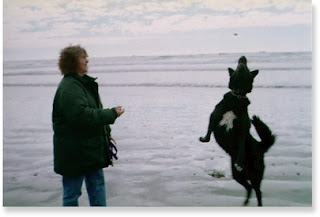 Email ThisBlogThis!Share to TwitterShare to FacebookShare to Pinterest
Labels: Pup and astral projection