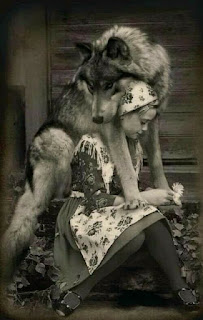 You were
my guardian,
my soulmate,
my most hilarious companion,
my deepest joy,
and, when you died,
my everlasting sorrow.
What gifts a lifetime brings!
A wild wolf puppy,
who travelled the forest trail
to find me.
You were
all I needed for joy.
You are
all that I know
of heartbreak.
Because of you,
I see animals
with awakened eyes.
Because of you,
I can hear
the suffering
in their helpless cries.
for Shay at The Sunday Muse. I could never resist a photo prompt with a wolf in it. LOL.
Right now, B.C. is digging out after three "atmospheric rivers" which flooded large areas of the province, destroying major highways and bridges, and flooding several towns where people were evacuated and lost their homes. The worst hit is a large agricultural area, where uncounted thousands of animals, domestic, agricultural and wild, drowned, the ones trapped in factory "farms" dying deaths of unimaginable terror. So while this poem started out to be about Pup, it is because of him that my heart breaks with every animal death, all these years since 2011. I didnt know I had so many tears in me. But animal lives are hard because of humans, so there is a lot of scope for grieving.