REQUIEM FOR A WILD WOLF 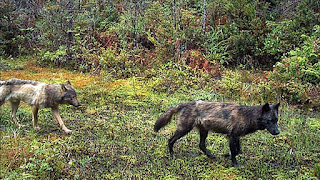 Skinny, lean and hungry, you came,
lured by the smell of campfire suppers,
garbage, small dogs who look like prey.
A wealth of food smells and sensations,
drew your hungry belly
out of the bush,
when you'd be wiser to stay away.

Now you lie dead, the careful word
"euthanized" obscuring the real story -
that we grow fatter as you grow leaner,
that you are being completely displaced
by the voracious needs
of the human race.

Sooner or later, your hunger brings you here,
where we - the big "we"
that means "only we matter" -
are "protected" by your death,
just because you came too near.

I mourn. I mourn.
You grow closer to extinction
as more and more of us
are born.

I am close to giving up
on human evolution.
All the facts are clear,
but we resist, refuse to hear.

But you - your heart is pure -
you live for food and family and clan.
You do the very best you can.
May those you leave behind beware
coming anywhere near
the beast called man.

I am sorrowful. One of the wolves involved in spring encounters with dogs in the Long Beach area has been euthanized, after food smells from campers at Green Point lured the hungry wolf  too close to humans. They are lean and hungry after a long winter. Their pups are being born, and it is natural they are lured by food smells and by campers' dogs. They are too desperate to remain at a safe distance. As always, when wildlife come "too close" to humans, they pay with their lives.

I should note that in the Pacific Rim National Park, wildlife officers are loathe to euthanize wolves. They felt it was necessary, as the wolves in this pack are losing their fear of man, viewing us as a food source. But I hate the struggle wild creatures have to survive in these times. I mourn each death. When it comes to humans and wolves, my heart is with the wolves.

Rest well, Wolf Brother. We are lessened by your passing.