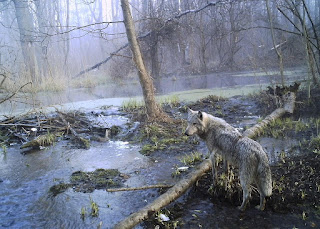 Thirty-six  years after
the humans left this place,
thriving wildlife have reclaimed
the site as sanctuary,
a green and verdant forest
covering the land,
now one of the rare places
on the planet
where wild creatures
live undisturbed.
How sad,
that it takes a nuclear event
to provide safe haven
for wild creatures,
that it takes our absence
to make their lives
more possible.
After cataclysm,
after the ocean
covers coastal shores,
after flood, wildfire,
drought and famine,
after climate refugees
have walked a thousand miles
and fallen
off the edge of the world,
it gives me comfort
to imagine
- slowly, in barely perceptible
increments of time -
greenness unfolding
across the land once more,
wolf and bear and deer
creeping back,
finding no trace of us,
making their way,
hesitant yet unhindered,
as in the earliest days
of our collective memory -
the garden unfolding
all its beauty
under friendly
benign skies
once more.
Thirty-six years later, because humans left the area, it is now thriving as a wildlife sanctuary, one place on the planet where wild creatures get to live undisturbed.
An article at Blue Dot Magazine in 2016 stated, "Humans, it seems, are worse than a nuclear disaster. A long-term study of animal populations around Chernobyl has found wildlife to be flourishing in the absence of human activity. A team of scientists surveyed the human exclusion zone surrounding the site, observing large animals like deer and elk to be in abundance despite lingering radiation." 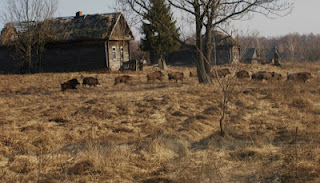 source
credit: Valeriy Yurko
For my prompt at earthweal : Re-wilding