Stitches Made by Fairy Fingers 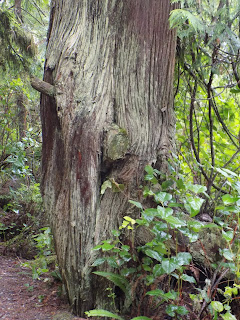 When I walk into the forest, the big old tree trunks lean their ears towards me, listening. I am singing the Forest Song……song of cedar, draped with Old Man’s Beard, so fine and soft-spun, it looks like small wingéd fairy folk may have stitched it onto the trees. 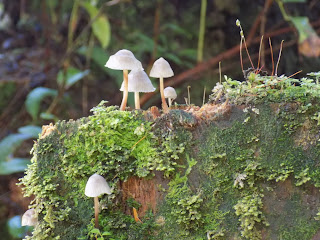 Perhaps they are peeping out at us, now, from under some mushrooms. 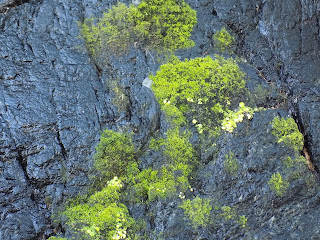 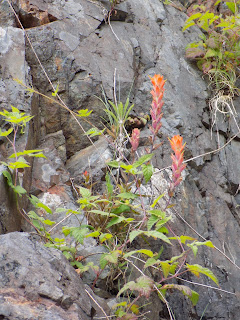 Who decorated the rock with green lace? Who planted the seeds that grew the flaming flowers sprouting on the rock-face? 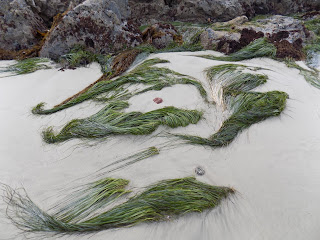 Moss and seagrass are soft and sweet. Brother eagle, once he has woven his nest of twigs, will gather some to line his nest, so his chicks will have soft beds. 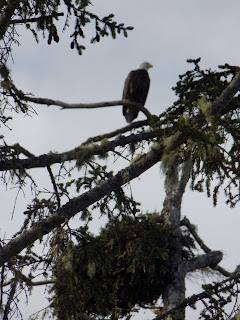 Magical beings live in the forest. Some we see; some hide themselves away. When all Two-Leggeds have gone home at the end of day, and the forest is returned to them, the creatures all come out. Wolf and bear pad softly along the forest trails.

This is the time of fairy-folk, who tiptoe about stitching moss and old man’s beard onto tall branches. Perhaps it is they who lay soft green along the rocks, on which to spread their fine china for fairy repasts under the light of the moon.

Brother Eagle was busy all day building his nest. He is tired now. But Sister Owl keeps watch from a fat, wide branch, her yellow eyes like lamps through the darkness, ready to alert the forest folk should unwelcome guests arrive.

When I visit, next day, the fairy dishes have long since been cleared away, and all of the creatures have hidden themselves, except for Brother Eagle, still working tirelessly at his nest. Strong and wide, it will last for generations of young eagles, who will take that mighty leap from its edge, springtime after springtime, as long as there is earth and water,  sky and tree.

I didn't have a photo of old man's beard handy, but it looks JUST like an old man's beard, thin and scraggly, draped among the branches throughout the forest, like angel hair on a Christmas tree.