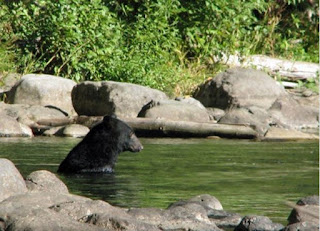 
Sing to me with Raven's gobble-cry,
with krak! of heron, hoot of sleepy owl.
Sing with the current slipping fast away,
the traveler's path, high heart  and wolfish howl.

Bear walks into the river, palms a salmon,
sits in the water, eats from his mighty paw.
Eagle, fierce of eye, in topmost tree,
waits for the leavings, as I watch in awe.

Such is nature as she's meant to be:
a cyclical return: salmon through bear
and back to nurture earth.
Sing me misty riverbank, and green,
a wealth of beauty ours 'tween death and birth.

Sing me a song of rivers flowing to the sea,
wolf howls at midnight under the full moon.
Sing its song of homecoming to me,
for, like the river, I'll be returning soon.

I found this in drafts, written in 2016. I can read it two ways: in 2016, I was still waiting to return to Tofino. Checked that one off my bucket list! Also, at my age, there is the natural returning of bodies to the earth to contemplate. The photo is of the foot of the river at Stamp Falls, where bears often come, as it is on the salmon migratory route. I went there often when I lived in Port Alberni, and sometimes saw bears and eagles there.

Sharing with the Tuesday Platform at Real Toads.