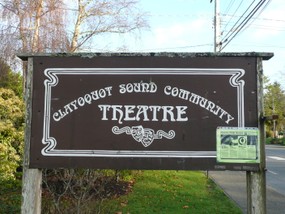 Last night, I headed to our small theatre (72 seats!) to listen to presenters talking about climate change, an evening titled Rise for Climate: Realities and Solutions. Needless to say everyone's concern is the rapid pace of climate change. But each speaker had stories of success in their efforts to help Mother Earth.

The evening was hosted by Jeh Custerra, campaigner for the Friends of Clayoquot Sound. Thanks so much, Jeh, for bringing us this hopeful and affirming evening. And thank you to the sponsors, the Friends, the Clayoquot Salmon Festival and 350.org.

The film crew of Directly Affected was filming the event and we were told we, as audience, will be part of their upcoming film.  Directly Affected  is about the effects of climate change – and who, on this planet, is not now or will not in the near future be impacted?

It is always wonderful when like-minded people come together and share wisdom. Local Nuu chah nulth carver Joe David spoke about indigenous ways and laws; he told how his ancestors, going back to pre-contact, held such wisdom. He sang a welcoming song and told us about a song that one of his forebears was given – in the forest, by a white wolf.

I was enchanted. (White wolves wander often through my dreams.) 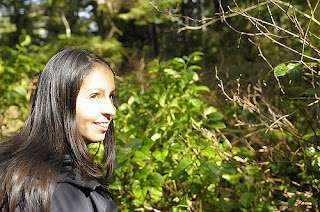 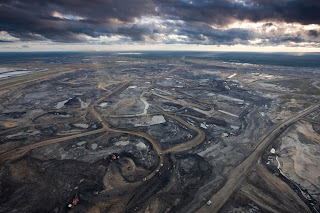 The oil sands  - northern Alberta
Devastation as far as the eye can see -
even in a plane.
source

Melina Laboucan-Massimo, a member of the Lubicon Cree nation, (David Suzuki Foundation Fellow/Lubicon Solar), told how the tar sands are devastating areas as huge as Washington in northern Alberta, and how the impact affects the indigenous people who live near there. She said that her community only got running water five years ago! 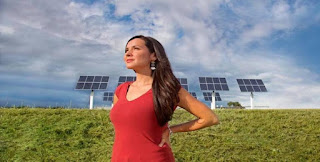 In response to the land around them being destroyed, her people erected solar installations to provide clean energy. She also talked about the tiny houses that are being erected along the path of the Kinder Morgan pipeline by indigenous people. 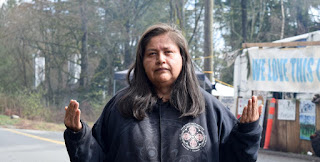 Clarissa Antone, of the Squamish Nation, the woman who tended the fire on Burnaby Mountain outside the gates of Kinder Morgan, to protect Mother Earth from the pipeline, spoke from the heart about how Mother Earth is dying and how much this planet needs us. Her brother Mike Anton talked about the totem pole he carved and cemented into the ground near the gates of the Kinder Morgan site on Burnaby Mountain, where the Antons and others have been camped, not as protestors, Mike told us, but as protectors.

Surfrider's massive efforts to clean beaches, gathering and hauling out for recycling what they find, (TONS of refuse that wash up on the shores), with the aim of zero waste management. They worked hard with local businesses to reduce the use of plastic. Our local CoOps don’t use plastic bags any more, and businesses have stopped using plastic straws. This may sound small, he pointed out, but with a million tourists passing through our village, it amounts to a lot of plastic waste.

So there were lots of positives, along with the awareness that we are running out of time to save salmon, whales…….and ourselves.

On Friday afternoon a totem pole carved by Joe David in honour of the hereditary chiefs of this hahoulthee (territory), which is being gifted to the District of Tofino, will be erected at the small park overlooking the harbour. It is a historical moment and I will be there.

It is events like this, as much as the beauty of the place, that make me so fulfilled living here. People here are conscious, aware, informed, and very willing to do what they can to protect the planet.

Walking home, through the darkened village, I was heartened that so many are doing so much in the places where they are.