You, the Seeker, My Lamp, the Moon 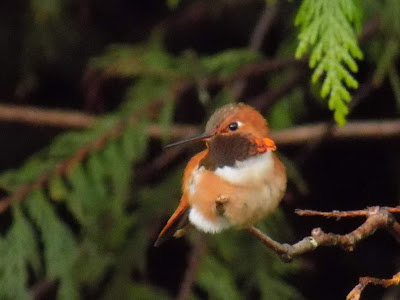 Little hummer,
irridescent rainbow in constant flight,
you whirred into the room at dusk,
thinking my lamp was the moon.
I swiftly clicked off the light,
to guide you to the window
where you beat frantically for a moment,
till you crouched in its corner,
terrified of the giant
whose hands were slowly lowering
to cup you gently.

You stilled, as I carried
your feathered lightness outside
and, when I opened my palms to set you free,
lay for a moment on your back,
surrendered to your fate.
Suddenly recognizing you had survived,
could once more see the sky,
in that same instant,
you were halfway 'cross the meadow.

Just so, do our hearts encounter
their similar terrors,
bring them down to size,
recognize the open door of freedom,
and, each in turn, take flight.

One from 2015 for the Poetry Pantry at Poets United. At the farm, given I keep doors and windows open during all the warm weather, sometimes a small hummer would find its  way inside, and lodge itself in a corner of the windowsill. In my cupped hands, they felt lighter than a feather, flight itself, suspended for that one moment. I have hummers here, too, but they stay outdoors. At least so far.