THE SINGING KITES OF WAT OPOT 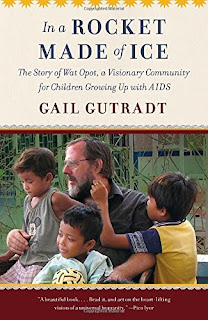 link to the book here

Khleng ek - the singing kite -
flies the heavens
in gratitude for harvest.
It sings its prayers to the God of the Wind,
for dispersing the clouds and bringing the sun,
so the rice grew well.

Below, the orphans of Wat Opot
know joy,
watching Brother Kite carry their dreams
and prayers
to the heavens, where all their parents live.

In long gone days, the old kite masters
could fashion kites that sang in seven tones,
a glorious symphony
heard below, especially in darkness,
when the heat and clamor of the day was done.
The orphans' kites sing in three tones,
sometimes five,
a miracle of small hearts
that try to hold big dreams
against the certain knowledge
of all that took their families
away.

Some time back, I read In a Rocket Made of Ice, by Gail Gutradt, about the AIDS-impacted (and many HIV-positive) orphans of Wat Opot, in Cambodia. The orphanage, which now houses many orphans, and offers medical and supportive care to nearby villagers, as well as programs for the children, was begun by Wayne Matthysse, a former Marine corp medic in Vietnam. When he saw the need and responded, he had only fifty dollars in his pocket.

Now, he says he still has only fifty dollars in his pocket, but the work they are doing there, the lives they are helping, sustaining and, often times, honoring at their closing, is phenomenal.Gail has spent much time there among the children, and relays the children's stories so beautifully, that at each's chapter's closing, my heart felt a regretful ping. I grieved at the end of this journey among the children, upon closing the last page.

It is not the sadness of their plight, but the joy with which they live, that holds great lessons for the rest of us.

reposted for The Tuesday Platform at Real Toads