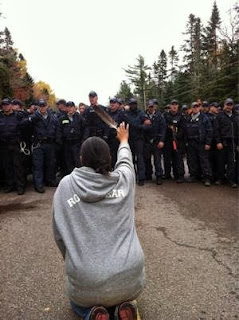 My heart is heavy tonight, kids. Today has brought a prolonged anti-fracking standoff by the Mi'Kmaq people and their supporters in Rexton, New Brunswick, to a violent eruption, as a heavy and intimidating police presence moved in on the protestors - who prefer to be referred to as Protectors, because that is what they are.

They have long been opposed to fracking in their area and have peacefully protested. But today police presence was so intimidating, it pushed everyone over the edge. Videos show  crying elders, young people yelling, "we are not armed, we do not have guns", aggressive police lines advancing, yelling "MOVE!",  on  terrified people, who might be understandably confused, in that moment,  as to what country they were living in. 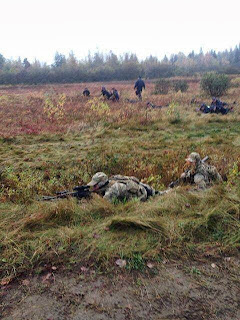 The men in camo are police and
yes, those are assault weapons.
And yes, believe it or not, this is Canada.

Pepper spray and rubber bullets were used against unarmed civilians who had, one would think, given we live in a democracy, the right to peacefully protest the assault on Mother Earth in their area.

Frustration and anger escalated, given the unskillful and disrespectful handling of the situation. There are reports a grandma was hit in the eye with a rubber bullet. Others were roughoused. The oppressive tactics, after generations of oppression under white rule, finally exploded, several police cars were set on fire, and 40 activists were arrested. 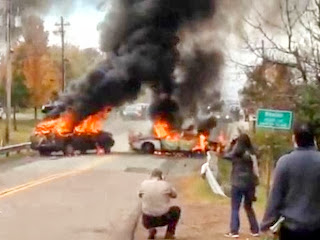 I do not condone violence in any form. But I can understand when people pushed to the wall get tipped over the edge by aggressive and confrontational behavior.

I was on the blockades in '93 to protect Clayoquot Sound's old growth forests. Arrests were made daily, and hundreds gathered daily to protest. But the RCMP behaved very respectfully, as the arrests were made. Their behavior ensured the situation did not escalate to what  happened in New Brunswick today.

What is fracking? Quick research  at Farm Aid tells me it is the process of mixing huge amounts ( 6 million gallons) of water, with chemicals and sand, then injecting them into wells at high pressures to break up the rock and earth and release large amounts of natural gas or oil.

It seems our thirst for oil will reach into every poor, rural, farming or aboriginal community, with no concern for the effects on Mother Earth, first and foremost, and, secondarily, to the people whose water, land and actual lives will be impacted in the process of filling our voracious appetite for oil and gas. The process is violent, blasting sections of rock,  releasing fuel, but also waste-water and chemicals.

"Each well can produce over a million gallons of wastewater laced with heavy metals, corrosive salts, naturally-occurring carcinogens like benzene and radioactive elements like radium, in addition to carcinogenic chemicals used in the process. Much remains unknown about what happens deep in the earth’s crust as a result of a hydrofracking well. For example, it’s unclear how far wastewater and chemicals can spread or if hydrofracking deepens existing fissures in the earth that allow for leakage into groundwater and streams. While companies can capture some wastewater for reuse or storage in holding ponds, estimates are that anywhere from 20-70% of hydrofracking wastewater remains underground." (farmaid.org)

It goes on to explain that food and livestock will also be impacted by the chemical runoff......So, are the aboriginal people and other environmental activists right to not want this in their neighbourhood? Damn straight! I watch the videos with an aching heart. I regret police vehicles were set on fire. I regret more that the way the police advanced so threateningly on these people ignited the standoff to reach such a pitch where protectors, emotions already running high, and fearful of the antagonistic presence, were provoked past the point of restraint.

How to start a revolution: disrespect the people who are stating they wish drinkable, not inflammable, water to drink, as a basic request.

In one of the videos, a young brave says to the police in front of him, "We're doing this for your children." Another voice says, "They don't care, man. They don't care."

I imagine some of the policemen have heavy hearts tonight as well. The problem is so much bigger than this one standoff. Oppression and incarceration will NEVER resolve the differences between the Establishment and the people living close to the land.

In the end, each one of us, wherever we live, will be impacted by the globally voracious appetite for oil and gas. Email ThisBlogThis!Share to TwitterShare to FacebookShare to Pinterest
Labels: and the insanity of the status quo, anti-fracking