This Poem is a Baby Kangaroo 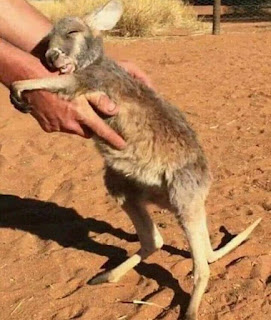 This poem is an inferno, fleeing creatures,
deadly thirst and heat, dried up rivers,
and not enough water in the world
to put out the flames.

This poem is kangaroos
trapped and impaled on fences
as the flames lick closer.
It is the burnt carcass of a kangaroo
caught upright against the wire fence
that stopped his escape.
It is his hundred mates behind him,
burnt to death where they fell.

This poem is the terrified cries
and laments of a billion wild ones,
running,  with nowhere to go,
desperate, circling, trapped,
as their whole world burns.

This poem is a climate crisis
with only one way out,
and leaders all pointing smugly
in the other direction.

This poem is a wild woman's grief
with frustration embedded.
It is doing my small bit,
while the big offenders
carry on with business as usual.

This poem is hope with nowhere to land.
This poem is a planet on fire,
with no one to put out the flames.

for my prompt at Earthweal: The Animals of Climate Change.

It is the animals that always break my heart. People have voices and resources, and the focus is always on saving the humans, as if we are the only ones that matter (which is how humans have lived on this earth the last few hundred years.) This one orphaned joey breaks my heart. My mind can barely wrap itself around a BILLION creatures, each in pain, trying to flee and dying.

I am watching the global response and alarm at the coronavirus with twenty victims, and how much news time and governmental action there is in response to the crisis. Yet climate change affects billions and is getting worse, with still no detectable response from the biggest offenders, governments and corporate criminals.

I have always been so hopeful. It is hard to be losing hope.