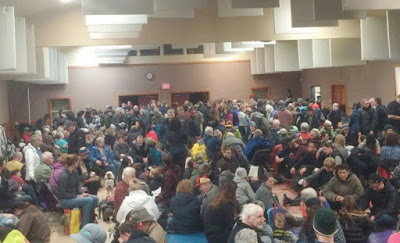 The Community Centre in Tofino,
packed with evacuees
during the tsunami warning
[photo by Catherine Lemke, twitter]

I have Sebastian, eight years old, with me for two weeks while his mom is travelling. I told him, "We will have adventures!" I just didn't expect it to be so soon. In the middle of the night, Chris phoned me to say there was a serious tsunami warning, and to get Sebastian and I ready to go to the evacuation centre which luckily is just down the street and up a hill.

The 8.6 earthquake in south eastern Alaska was positioned in such a way that it put all of the western coast in danger. There was a big aftershock in Port Hardy, north-Island, soon after the Alaskan one. They were expecting a hundred metre wave might be out there headed our way. Port Alberni was alerted as well, as during the tsunami of 1964, the surge down the inlet did some damage.

What does one take when one has minutes to flee? Chris found me BRUSHING MY TEETH, and said, "We have minutes!" I took our toothbrushes, the Grab and Go survival kit Chris gave me for Christmas, and some fruit snacks for Sebastian. What I will remember next time: our tablets!

Out into the rain we joined the people walking. Way too many cars were everywhere, no where to park. Up the hill and into the centre which was full of people and their big lovely dogs. All was very calm. Our LOVELY mayor walked among us, calm and smiling, chatting with everyone. I just love her. The young people who are disaster relief people did their jobs well.

Tofitians have weathered these warnings before and each time it was lowered to an advisory. But this time, I thought it might possibly be The Big One. (I often joked before moving here that I would finally get here and there would be a tsunami. Prophetic words.)

Sebastian was not scared, but he got tired. He never complains though. He is a very easy-going youngster. We sat and waited and chatted and patted dogs. Such lovely dogs. There was a puppy JUST like Pup, still with his soft puppy fur. And there was an old one just like Pup who came from Opitsaht, where Pup came from -  a relative. My heart panged. There was a golden with a big beaming smile and eyes of love. I felt for the parents with babies - including a young mom with a newborn who said, laughing, that she felt a bit of terror. No doubt.

The wave was supposed to hit at twenty to three, and then twenty to four. But it didn't. The announcement was made at four that the warning had been lowered to an advisory. Applause and good words about how much we love this place, what a great community we are. It is such a privilege to live here. It isn't just the spectacular beauty and wildness for me. It is the people, the village of good folk who look out for each other.

The wave is still out there. But it seems it will dissipate and won't hit here, for which I am very grateful. I get very fatalistic in a crisis, accepting  of whatever comes, not nervous. But it would have been difficult had all of us had to stay much longer in such cramped quarters; we were packed in. It was good to come home and have home still be here.

As we walked home, Sebastian said, "Well, you said we would have adventures." I don't know what I'll do to top this, LOL.

This morning it was raining and we went out for storm candles, as the power has been going out often in the high winds, and a reporter for CHEK TV interviewed Sebastian and I for the news. Oh my God, I will be on tv looking like a drowned rat with Bad Hair. LOL. Oh well, I can get away with it in Tofino. They'll just think I am an Old Salt.