The Consciousness of Trees 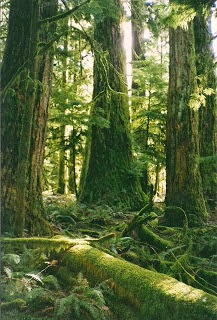 
Raven is calling a meeting in the forest.
All the trees and creatures open their ears.
"We need to address the sadness of the trees,"
Raven begins.
The deer and bear and cougar nod their heads,
for they know.

"There is a huge disconnect between
the consciousness of trees
and the unconsciousness of humans,"
she continues.
We of the forest understand
how to live together, in diversity.
We exchange resources, so that all may live.
How can we teach the humans
that their way is not The Way?"

Bear speaks. All tilt their heads to hear.
"There is a sadness in the trees along the clearcuts,
where their sisters have been pulled,
without respect, without the trees' consent,
wantonly, with no regard
for the survival of the forest.
It's like the wisdom teeth of the planet
are being pulled, without care or anaesthetic,
as if they have no feelings,
as if they are not living beings.
Trees suffer more,
when they are abused this way.
Why do the humans not hear their cries of pain?"

Owl opens her eyes to speak.
All quiet, respectfully.
"There is a deep wound in Mother Earth,
that can only be healed
if the Two-Leggeds awaken
from their disconnection
with the land,
and learn to live with respect and love
for all other living beings."

All of the creatures nod, then sigh.
In their eyes is the belief
that humans are too limited
to make such a prodigious leap.
Sadly, they return to
their woodland homes and caves,
to ponder the problem
of the sadness of the trees.

In this time of accelerated passage,
the trees of the planet,
along with all its creatures,
are waking up
to a living nightmare.
They are asking us to hear their cries,
to understand their pain,
and, belatedly, to awaken, too.

I watched a fascinating video the other day, whose title, The Consciousness of Trees, sparked my Muse. Suzanne Simard, Ph.D, has studied how trees communicate, network and help each other survive through their underground root system, that links old Mother Trees, not just to trees nearby, but all across the forest.

She says their root systems exchange carbon and nitrogen, even with trees of a different species. She says the forest ecosystem works like the neurons in our brains work, not just physically but metaphysically, and the diversity is what gives the forest its resilience to withstand events. Dying trees move their resources to younger living trees, so the forest can survive. Clearcutting and modern-day logging methods obviously pays no attention to any of this.

I have used the term "the wisdom teeth of the planet" before, in a poem written in 2010. When I see the big old roots sticking up, the image of wisdom teeth, the pain and the bleeding, their resistance to being uprooted, are what come to mind.

Day 3 NaPoWriMo
Posted by Sherry Blue Sky at 7:00 AM