The White Lions of Timbavati 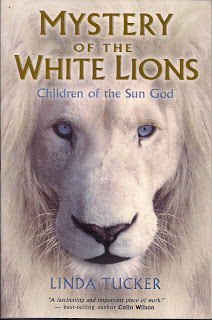 The white lions of Timbavati
came here from the stars.
The shaman says the lions' fate
is intertwined with ours.
Long ago, they shared our caves.
When earth was bathed in ice,
one looked into a human's eyes,
offered himself in sacrifice.
They offered themselves to us to eat,
so humankind could survive.
In return, we have hunted them
to extinction -
just thirteen wild ones
left alive.

The legend of the white lions, many of whom have blue eyes,  is that they came to earth from a star that is aligned with Timbavati, in Africa, where they originated. The people of those lands believe white lions are messengers of the gods.  The shaman, Credo Mutwa, explains their fate is intertwined with ours and when the last white lion leaves the earth, humankind will disappear.

They have been hunted to the edge of extinction. There are now only hundreds, in captivity, mostly in canned hunting compounds, where they are being raised to be shot. There are thirteen wild ones left alive.

The Global  White Lion Protection Trust, founded by Linda Tucker, is devoted to keeping three prides of white lions alive in a 4400 acre refuge in the bushveld in Africa. Linda has written books about the white lions and her heartbreaking efforts to keep safe those few who are left. It was to Linda that Credo Mutwa told the legend of the white lions, and their link with humankind. Her book, above, is one of the best I have ever read.


for Susan's prompt at Midweek Motif: Meteor showers. I imagine a meteor  shower depositing some star lions many eons ago, in the heartlands of Africa. These lions wander through my dreams..........