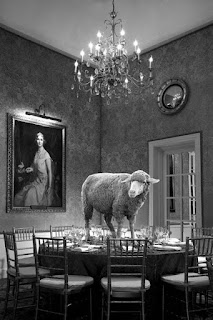 Image by Justin Dingwall
click HERE for his website.
You can take a sheep to the table,
but you can't make her eat.
She will, or won't; her choice.
You can present all the facts, the science,
the realities, but the delusional prefer
their own versions; the fake news
they speak of, they don't realize,
is everything they believe.
Once I watched a wolf-dog
make a graceful leap
from floor to the middle of
a family dinner table,
in a single arc, not spilling
a single thing.
He looked around
at our astonished faces.
"What? I just wanted to see
what's for supper."
I am watching the dismembering
- the dishonouring, the unpatriotic discrediting -
of everything I once believed;
watching those fanatics who would rather
believe lies than believe in their own
democracy. I am waiting,
with sheep-like and placid patience,
for January, in hopes a certain voice
will fade from the airwaves,
so reasoned discourse can
begin again.
What's up is down;
what was sense is nonsense.
It is as astonishing to me
as a wolf-dog
in the middle of the dinner table,
who suddenly learns
to speak.
Well. I waited for the election. I am now waiting for January with the same indrawn breath. One reporter hoped that after January 20, a certain voice would not be covered on the news. God, that would be awesome. Just to not have that voice in my head, like an earworm, tunneling into my brain relentlessly, like the worst abusive relationship I ever survived. I did get a kick out of Rudy Guliani literally melting on-screen the other night, ranting about the conspiracy we are all in on.........I have never before witnessed mass hypnosis, or mass mental imbalance. It is ASTONISHING to me that so many Repubs in Congress stay silent. Where is their patriotism now? Where is their pledge to uphold democracy? What about their vow to serve the people (who are dying while the commander in chief plays GOLF?) How can one man abscond with the reason of so many people, so their eyes take on an absentee, fevered glow and they reject facts and cling to fanaticism? I will never understand it.
for The Sunday Muse