Weary In My Soul 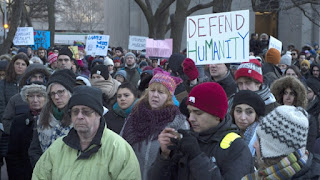 
We are the Baby Boomers,
the generation we thought
would change the world.

We're seventy, now,
and oh, how the world
has changed.

And now it feels like
it is changing back:
racism, divisiveness,
rattling of the sabres of war,
muzzling the press,
registration of The Others.
(Of course, we understand:
there is no "other."
The Other is Intolerance.
It's us.)

Once more, we're marching in the street.
But this time our solidarity
is even stronger, and has
no divisions of age, race or religion.

As dark forces try to wrest the planet
from its people,
our spirits, weary though they are
from this long struggle,
rise in resistance,
our mantra:
Love trumps hate.


Last night in Quebec, a terror attack on praying Muslims, by gunmen likely incited or given license by the recent focus on this community by the highest office on the continent, and the resulting furor in the media. My old heart grows weary, friends, at all this hatred, injustice, singling out of peaceful people who simply want what all people want: to live, to love their families, to be safe, allowed to live their lives in peace.

But I am heartened by people rising in response, protesting, marching, insisting this is not the America (Canada and US) we believe in.

Elizabeth May, our Green Party Member of Parliament, said it best, in Parliament this morning: "Today, we are all Muslims."

This morning crowds protesting the trump ban on Muslim travel have shut down the US Consulate in Toronto, in solidarity with the Muslim community. I have never witnessed a worse ten days of political mayhem. May it end soon, somehow. Enough is already too much. Good luck to us all.