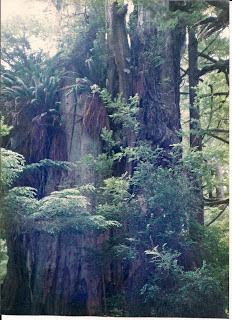 Let's tiptoe with the Druids
into a world of green:
tall, sentient, conscious beings,
who help us breathe,
unseen.
Do you feel that thrumming
in the centre of your chest?
Trees, like elephants,
communicate
with every forest guest.
Look for the Mother Tree,
the most vibrant  in the glen.
She supports all life around her,
across the grove and back again.
I wonder at the fear they share
across the forest floor,
holding hands, and trembling,
at the chainsaw's
mighty roar.
Desperately, the forest tries
to dream their dreams in green,
but are waking to a nightmare
with every chainsaw's scream,
laying waste the ancient world of green
that took so long to grow,
before the dollar bill became
the only god we know.
At Fairy Creek, the Druids weep
as the Standing People fall,
reducing our chances of survival.
Death to one
is death to all. 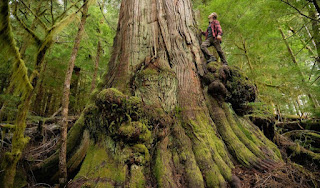 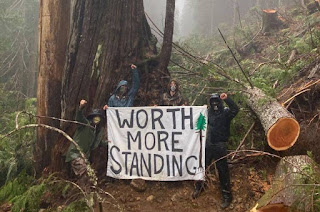 There was a time on earth, many millennia ago, when carbon dioxide was so great human life could not be sustained. Then came the ferns and trees, making the earth habitable, cooling the planet and allowing us to breathe. "Thus," says Diana Beresford-Kroeger, in To Speak for the Trees, "cutting down trees, our life support system, is not only a suicidal act; it is a homicidal one, too."
She says the feeling in our chest we get in the forest is infrasound communication that trees, like elephants, emit over great distances. This feeling is called mothaitheacht. Diana was taught by Druids, who believe that trees are conscious, sentient and feeling beings, who can think, and maybe even dream. I hate to think what they must be feeling in Fairy Creek right now, as some of the oldest trees left on the planet are being mowed down by rabid greed.
for Brendan at earthweal: A Timbered Choir
Posted by Sherry Blue Sky at 12:43 PM