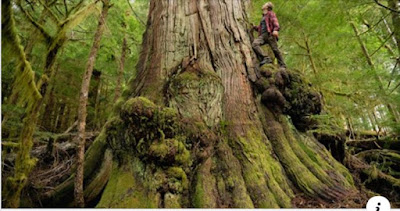 In the forest dark and deep,
the shaman whispered “Hush.
The trees are whispering a message.”

"Do you hear the drum?"
I think I heard them sigh.
And on the wind, I heard
their steady beat, like the heartbeat
of the forest, tapped out gently
by forest defenders
come to save the ancient trees
from the loggers’ saws.

Emerging into a clearing,
I saw the tree people,
gentle souls, singing to the trees
with tears in their eyes.

“I love the trees!” one called
as the police carried him away.
Another and another, lifted
from their place on the road,
put into vans and carried
off to jail, because they know
these trees are sacred. They know
the planet needs every old tree left.
They watch the future sliding away
so corporations can make
an extra billion.

“No jobs on a dead planet,”
the land defenders mourn.
In two years, or three,
the loggers will be just as unemployed,
but the last of the old trees
will be gone.
Too late then to listen for
the forest's song.

Humanity needs a dream;
we need transformation.
We need to find our way
back to the garden.

“Plant trees,” the shaman said,
handing us magic seeds.
But even planting trees,
we need the old growth
still alive
in order to survive.

This was inspired by a dream Truedessa had and related to me. She describes the dream in her poem at this link. It is amazing. I wrote mine before reading hers, so mine is about my grief at the battle being waged to save Fairy Creek. The tree above is on the chopping block. Unthinkable.

The police have exclusion zones, refusing journalists the right to film and report on what happens during the arrests. Unconstitutional. Protests are going on in many cities in B.C. but the government doesn't care, isn't listening. Jobs, jobs, jobs is all you hear. But when ALL of the forests are clearcut and the Island is bald, (we only have 2% of the old growth left), they will be just as unemployed and these ancient beings will be gone. It is breaking my heart.

One good thing. The other day, 95 seniors showed up at the blockades. The police took one look, and went away. They did not dare arrest 95 seniors with their canes and walkers. Go, seniors!