Under Rage-Red Skies, This is Still Turtle Island 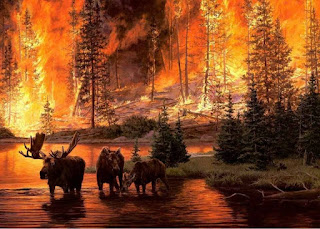 Underneath the raging wildfires,
the rage-red skies of this apocalyptic moment,
under the lashing and battering of hurricanes,
under the floods, the overflowing riverbanks,
the melting tundra, under the assault of Big Industry
ravaging the earth for profit,
this is still Turtle Island,
her mother’s heart beating
for her many children.

Mother Earth still faithfully parades her seasons,
one after another, following the ancient rhythms
and cycles, even though we have forgotten how
to attune ourselves to her beat.

Generously she grows what she can on depleted,
flyaway soil, stoically she tries to hold
too much carbon, when we fell the forests
which are her lungs. When she can no longer
hold it, the skies dim, the temperatures rise,
the melting, the floods, the Armageddon fires
prophesied in ancient times
begin.

From the spirit world, our ancestors watch
with sorrowing eyes as the wild ones
flee flames high as mountains.
From the spirit world come laments
on a windigo wind at the plundering
of forest and prairie and river wild,
for oil, for greed, for the economy.
But there are no jobs on a dead planet,
no food on parched earth,
no fresh water, when the oil runs into
the last of our lakes and rivers.

for my prompt at earthweal: Considering the Beyond-Human Realm