And Now for the Good News 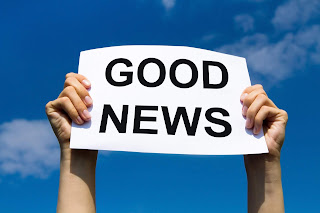 
I have always been a positive, optimistic person, sometimes annoyingly so, to people with a more jaundiced view of life. I always believed the transformation of consciousness would occur in time. We have all the information, have had it for fifty years. The governments that are supposed to legislate the tough steps we need to take to address climate change have not done so. Had Al Gore been elected, when the Presidency was wrested from him, we would be in a much better place today.

I will admit, this past year, with everything seemingly going to hell - when I have been living my worst nightmare in terms of "leadership" on this continent - I have known true discouragement, felt helpless, begun to believe that there is no stopping us from destroying the earth and ourselves, especially as those in power want to hang onto that power, and do the bidding of the multinationals who have a death-grip on the planet's limited and vanishing resources.

But one friend, an environmental activist, tells me my poems just add to the trauma. And another, who has spent her life working for clean energy, urges me to hold the vision of the world I want to see, put that out into the world - add the hopes, the dreams, the vision, instead of adding to the darkness and despair.

My friend who advises me to hold the vision also believes we will not change incrementally - and in fact we dont have TIME to change that slowly - that the transformation of consciousness will come suddenly, because of an event, possibly a cataclysmic one. She also reminds me there is a spiritual component to the struggle on this planet, and that the more of us who hold the vision, in the light, counteract the darker forces who right now seem to be in ascendance, but who are most likely far outnumbered by people who want to see peace and justice - this world, the way it was meant to be - and could be still, impossible as that feels right now.

I think we are seeing very clearly, now, that the planet is in trouble. Starving orcas, raging wildfires, floods, famines - we already have climate refugees and their numbers will grow. We might very well be among them. This isnt happening at some comfortable date in the future. It is happening right now.

So what is the good news? Many people and countries ARE addressing climate change, just not stubborn, stuck-in-capitalism North America - clinging to the system that is bringing us all to our knees.

We can help Mother Earth if we switch from fossil fuels to clean energy: wind, water, solar, zero point. (Zero point energy uses a magnetic field to harness the energy found in a vacuum and send it to a generator.)

In India, they are making roads of recycled plastic. Britain is testing this possibility. The Netherlands are testing road building from recycled ocean waste. Future roads could be made from plastic bottles - the bottles that are littering landfills everywhere. (And that should be abolished, along with plastic bags.)

A teenager has invented a way to clean the Garbage Patch in the ocean - his system using floaters is predicted to harvest half the patch in five years. (theoceancleanup.com)

In Beijing, SOLDIERS ARE PLANTING BILLIONS OF TREES to counter air pollution. A wonderful use of military resources.

In Germany, all cars are mandated to be electric by 2030.

In California, all new roofs must be solar.

One easy and effective way to lower CO2 emissions is to switch to a plant-based diet. Not only will emissions be reduced, but animals will not live lives of terror, pain and desperation while they wait to arrive on our dinner plates.

Those conversations helped me regain some hopefulness, feel more empowered, less helpless. The climate events on the way may be what it takes to push us into unified action. It is too bad we are reacting to  crises, rather than being pro-active, but we humans learn slowly, much slower than the whales and other wild creatures already experiencing distress.

I hope some of this news is encouraging to you. It feels good to know people like you and I are working hard to do what they can where they are. We live in hope. We need it, as we have grandchildren who want and need to live in a viable world.