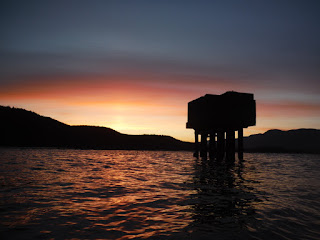 The soundless night
huddles under
its blanket
of darkening clouds
faintly rose etched
by fingers of fading sunset.
Settling,
it pulls its mantle of repose
tenderly
across the sleeping city

and a slice of moon
portal of mystery
recipient of dreams
sweet prompter of desire
inspirer of songs,
hangs over hills
bunched like a lumpy giant,
a slice of watermelon
swinging softly
in a pomegranate
sky

- an oldie from 2000, posted for the Poetry Pantry at Poets United, where there is a lot of good reading every Sunday morning. I actually found a photo to suit the poem, rather than the other way around. When I wrote the poem, I lived near those rounded hills, that looked to me like a lumpy giant lying on his side........
Posted by Sherry Blue Sky at 2:59 PM