Lessons the Deer Can Teach Us 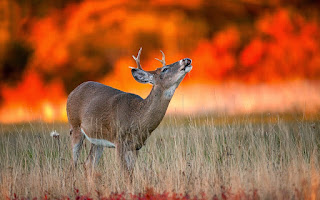 "The opposite of extraction capitalism
is deep reciprocity."
- Leanne Betasamosake Simpson,
from As We Have Always Done: Indigenous Freedom
Through Radical Resistance

Once, in the long ago,
the deer disappeared from the north
where the people had been
taking them wastefully, without respect.
The deer refused to participate
in this inequity any longer.
They went elsewhere
and the people grew hungry,
and then awakened.

Today I can see in indigenous eyes
that they too are intentionally withdrawing
and resisting the settler/colonial system
that has been trying to disappear them
for three hundred years.

They oberve us with blank eyes
that turn us into white ghosts.
Their opaque expression says,
"I have removed myself
from your system
of oppression, which extracts
without giving back."

I watch with respect and admiration
their strength and power rising,
hear their true words.

Like the deer,
they are removing themselves
from the greed-crazed mamalthni,
to follow their own path
on the earth they have tended
for ten thousand years -
the earth it took we settlers
only three hundred
to destroy.

In fact, it feels like Mother Earth herself is removing herself from us in the only way she can, with storms and wildfires and floods. Rampant  capitalism set in place the destructive path that got us here, yet it will not ease its grasp upon the coffers of the world. They will cut down what trees are left after the wildfires until there will not be a bit of cooling or oxygen left on what will then be an uninhabitable planet. It is unfathomable  to me, how crazy this greed is. It is a voracious, all-consuming madness. But now the bill is coming due and who will suffer most are  the marginalized and our non-human relatives. Whales are already swimming farther out to sea in search of food, in waves that are too warm. The screams of animals in the wildfires haunt my dreams. We created of a bountiful garden a hell on earth, yet believe we are the only thinking creatures. I withdraw further into silence, watching the madness unfold.