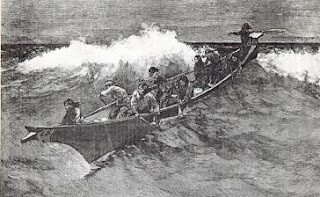 The Nuu chah nulth people of the West Coast have cared for the land, water and its creatures for ten thousand years, according to the principle of Hishuk Tsawalk: "Everything Is One". Each being is seen as a relative in the tapestry of life. Even the lowly slug has territory that is respected. “There are spirit forms in everything that surrounds us,” the wise ones say. When someone harvested cedar bark, back then, permission was asked of the guardian of that area. After harvesting, that tree and that part of the forest would be left alone for many years to heal.

In those days, pre-contact, the whaling canoes set forth from Echachis, at the south end of Wickaninnish Island. A whale hunter was trained from birth for the hunt. When grown, for months before the hunt, he prepared with prayer, bathing and fasting.  He and the whale would meet in dreams, to agree that that whale, and no other, would be taken. It was a sacred contract. He would paddle until he found the whale, and fulfil their agreement. After the hunt, everyone would gather to process the whale into the products they would use for food, trade, barter or sale. Then all would feast in celebration, with many songs of gratitude and respect being sung for the whale whose life sustained the village. First Peoples have always understood the necessity of maintaining the balance of the ecosystems that support all life.  How they must recoil at the mamalthni’s* heavy footprint on the land, our disregard for tomorrow.

In spring, I watched three whales rubbing themselves on the sandbar in the channel. I gazed across at Echachis,  reflecting on long-gone days, when the canoes would head out to meet the cetaceans. Whales, the keepers of  our collective memory, are now making their difficult trek through warming seas, pollution, hunger and death, brought by the colonial culture of domination, greed and money. The great beasts are the wisdom keepers, intuiting how all that we hold dear is coming perilously close to being lost. No wonder their song is so mournful, and their ancient eyes so sad.

If only  mamalthni*
would learn we are but one link
in the chain of life.

*Mamalthni is the Nuu chah nulth word for white people. I have been told these things by the Nuu chah nulth people of this land, in workshops and gatherings. If this earth is to survive, we need to hear their wisdom and learn to live with Mother Earth as they do. Soon.

A lengthy haibun for Margaret's Artistic Interpretations at Toads: a Whale's Tale.