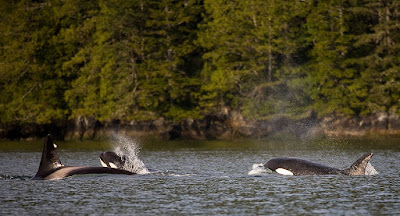 After an oil spill,
the mist above the inlet
is filled with the spirits
of all of the animals
who have died
in the spill.

Orca-, eagle-, heron-spirits,
hover over the ocean.
They rest in trees
along the shore.

They carry a message
for the people of the earth:
Wake up.
Wake up to
Mother Earth's cries.
Heal her wounds.

After the wildfires,
the smoldering, parched earth
releases the spirits
of all the animals
who were burned
in the flames.

They carry a message
for the people of the earth:
Wake up.
Wake up to
Mother Earth's cries.
Heal her wounds.

After flood waters recede,
and all of the bodies
of drowned creatures
are bagged and carried away,
the spirits of that place
sit vigil near the watery graves,
praying we humans
will awaken to our mandate:
to replenish and heal
Mother Earth.

They carry a message
for the people of the earth:
Wake up.
Wake up to Mother Earth's cries,
her distress.
Awaken to all
you can be,
all you can do,
to heal the Earth Mother,
the only home
of all creatures.


The idea for this poem came from reading Into Great Silence : A Memoir of Discovery and Loss among Vanishing Orcas by Eva Saulitis. Eva spent twenty years among the orcas of Prince William Sound, both before and after the oil spill. The animals she grew to know like her family are now vanishing due to the after-effects of the oil spill, the intrusion of human development into their wild habitat,  and the warming seas of climate change.