Not On the Evening News 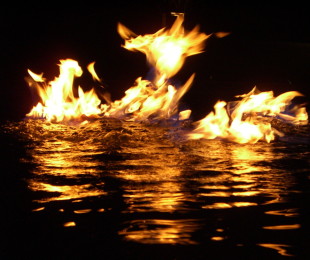 
We won't see it on the evening news,
corporately controlled,
because corporations are not about justice.
They are about profit.
And profit requires an unaware population.

So we won't see on the news
that rivers catch on fire from fracking,
which releases methane into the water,
which can then be set alight.

Ruling powers suppress clean energy inventions,
have done for decades,
fight tooth and claw to maintain
dependence on oil,
cite "the economy",
hope we don't figure out
we don't need oil at all.
Why aren't governments leading
the switch to clean energy,
which would provide
millions of jobs world-wide,
plus give the planet (and us)
a fighting chance?

It isn't on the news that tigers,
(an endangered species),
are "farmed" to make alcohol,
their bones marinated in rice wine
for eager connoisseurs.
They don't want us to know
there are now more farmed tigers
than tigers in the wild,
4000 farmed,
3300 in the wild,
not many, either way.

Does anyone tell the starlet
that an ostrich died
so she could walk the red carpet
with her designer bag?

The big secret not many speak of is
that our immense, beautiful Mother Ocean
is dying: from our dumping, our plastics,
our effluent, pollution, radioactive waste.
Dying from our assumption
that there will always be More,
that our need  (our greed) is paramount.

Has humanity abandoned spaceship earth,
that only human want has any worth?

And, still, it can get worse.

There is a man
who makes my hair stand on end
every time he speaks.
If the unthinkable happens,
and he's the one in charge,
we will truly be up Shit Creek.
And he will be the guy
holding the match.

A rant, after reading about the rivers, the tigers and the ostriches yesterday morning. For Susan's prompt at Midweek Motif: Secrecy. There is so much the general public doesn't know - that corporations (and governments ruled by corporations) don't want us to know, that I could go on and on.  But this is enough to ponder, for today.