Waiting for the Light to Out Shine the Darkness 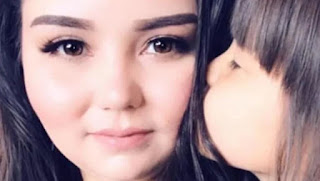 Chantel Moore and her daughter Gracie

The policeman who shot Chantel
will not be charged. Two other
police shootings have occured
in my small village since her death.

Last week the remains of 215 native children
were discovered outside a residential school
in Kamloops; more bodies likely will be found
outside more schools, unleashing
generational pain from colonial oppression
that it seems will never end.

This week a young white supremacist
drove his car into a Muslim family, killing
all but a nine year old boy, whose
whole world just blew up.

Those trying to save the very last
of the old growth are being arrested
out of sight of press, who are not
allowed to witness the intimidation tactics,
as militarized police move in,
and trees are felled beside land defenders
sitting in nearby trees.

This is not the Canada I knew
and once believed in.
They are talking about canceling
Canada Day; it is not a time to celebrate,
when so many are in pain.
I grow quieter and quieter,
observing a cancer spreading
across the land. At a time
when the planet most needs our greatness,
humanity is heading in the wrong direction.

I grapple for hope, finding it
in the hundreds of seniors standing
for the trees; in the young, fighting
for their future; in those gathering
in vigils to remember small, terrified
native children, who suffered
at the hands of their abusers; in those
lighting candles and coming together
to mourn the hatred that killed
a family out for an evening stroll,
because they wore hijabs.

When they go low, we go high,
one of my heroes said not long ago.
I grow quiet, as the injustices, the horrors,
mount up. I wait for the kindness
of most Canadians to shine a light
so bright the hatred in dark hearts
will disappear.