A FEAST OF FOOLS 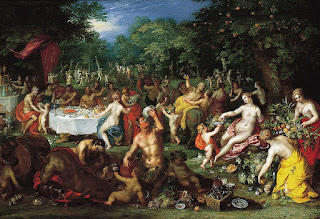 I did not have to go far to find a Feast of Earth Fools,
led by a Lord of Misrule. Across the border
a bacchanal such as we have never seen has been
rioting for four years that kept me awake at night.
It changed me.

Emerson said, "Wisdom consists in
keeping the soul liquid."
Well, I tried. But it was the Misruler's defeat at the polls
that restored my soul to me, and renewed my hope.

There are still fools aplenty in the halls of governance,
who likely will try to obstruct every good step forward,
because that's what fools do, when power and party
come before the people they are paid to serve.

I feel the Ancestors hovering near.
They are worried. They see we are only
a handful of years - a handful! - away
from climate catastrophe. I see the look
in Greta Thunberg's eyes - is she giving up?
This year trudges on to its exhausted close.
"Next year," I say, with faltering hope,
"next year will be better."

Our job as poets is to bear witness.
"Bear this," the poet was told in a dream,
so bear it we must. The creatures starving,
dying, going extinct, silently disappear.
They have no voice with which
to tell us they are gone.
The world waits for us to notice,
to care about something beyond
our simple lives.

This earth ship is sailing a stormy,
warming, plastic-laden sea.
When the poles melt, the oracle says,
the sea will rise fifteen feet.
Millions will drown, seaside cities
will go underwater. Including mine.

Whichever horizon to which
humanity sets  sail
is fraught with peril.

A poet told us we don't have to change the world.
"Our only task," he tells us, "is being changed."*
And after we change, we act.

Well. Our task is being changed insofar as our awareness leads us to change our habits and priorities, so Mother Earth and her creatures can live. And to raise our  voices to demand those who lead us lead us towards zero carbon emissions and clean energy. Like yesterday.

for earthweal, where we are contemplating The Feast of Earth Fools.  Wishing you all a more encouraging 2021.